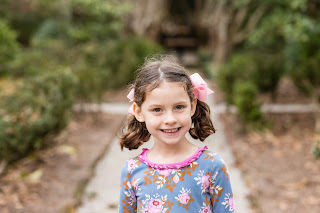 This week is Food Allergy Awareness Week so I thought I would do a quick recap and update on Ruthie, our little food allergy warrior.
For those of you who don't know our story Ruthie, our third child, was diagnosed at about 16mo with a peanut allergy. She had had a few mild reactions (hives and some slight facial swelling) to peanut butter right before her 15mo appointment so at that appointment we got a referral to see an allergist. When we went to the allergist I had him totally convinced it was just a skin reaction. She had severe eczema (most likely the reason she has her peanut allergy...treat that eczema early and aggressively friends!) and her skin was super sensitive to lots of things. He was ready to send us home with instructions to come back "sometime" to get skin tested for peanut. I pretty much begged him to do it that day because I already had childcare for my older kids. So they did the skin test, she had a pretty large reaction pretty quickly and we ended up leaving the office with lots of instructions for what to do in case of a reaction, an epi pen, and a prescription for a blood test. The allergist was pretty impressed with how large her reaction was. We had the blood test done and it was positive and we found out some months later that not only was it positive but they had done a peanut protein test and it showed that she was more likely to have an anaphylactic reaction. Well we had been nervous before but now we were terrified! We also knew that not only was Ruthie going to have a reaction if she ate peanuts but she was also contact allergic so she would react if she touched peanut.
I don't think I can ever describe what it feels like to know that your child could stop breathing if they put the wrong thing in their mouth or you forget to read a label just once. Every meal was scary. Every trip out of the house involved watching not just what our kids were doing and eating but watching what everyone around us was eating as well. Ruthie's allergy affected not just her and Paul and me but our other kids as well. The big girls were fiercely
protective of her and could often spot someone eating peanut butter faster than I could. For years we walked around with what felt like a big rock sitting on our chests making it hard to take a deep breath. Praying that she would outgrow her allergy.
And then we got our miracle. She didn't outgrow her allergy but somehow (I can't really remember how) I learned about Oral Immunotherapy (OIT). The first time I read about it there were only a few places in the US doing trials. I thought it would be something she could maybe do many years down the road. But I kept my eyes and ears open, waiting. Then I stumbled across private practice OIT. Drs who weren't part of trials that were doing OIT on their own. They were using very well developed protocols. There were so many success stories. I found a community of parents who had searched for a treatment, who had traveled hundreds and thousands of miles for the hope offered by OIT and who had found freedom from the restrictions of food allergies. I started looking around and there were doctors in Atlanta doing it. But Atlanta is over 3 hours each way. But it was a possibility. Then there was a doctor in Salisbury, NC doing it. Only 2 hours each way (AND you don't have to drive through Atlanta traffic!) and we have family in the area so we would always have a place to stay if we needed to.
We went for a consult with our OIT doctor in October of 2017, did some more labs in the spring of 2018, and started OIT on August 29, 2018. The week before and the 2-3 weeks after were absolutely terrifying. We were constantly on edge watching for a reaction. We went to Salisbury every other week for 11 months. It was a lot of driving but it was pretty easy driving and we just got used to it. Once we reached 12 peanuts for 2 weeks Ruthie did a 24peanut challenge in the office on July 29, 2019. Our child who had started having signs of being airbone allergic to peanuts right before starting OIT ate TWENTY FOUR peanuts with NO reaction at all. It was amazing. And terrifying to watch her eat all that. And then we were sent home with instructions to eat 8 peanuts every day and come back for a follow up in a year.

The freedom that has come from OIT is wonderful. Less than a month after graduating from OIT we sent Ruthie off to kindergarten. I had been dreading the first day of kindergarten for YEARS. I was terrified that they wouldn't be as diligent as we were and I was worried about the social isolation that often comes with food allergies. I was worried that if she did have a reaction they wouldn't catch it fast enough. But her first day of kindergarten was so different from what I had envisioned over those many years. I dropped her off in her classroom (with her fabulous teacher who had been given a crash course in OIT) and walked away confident that my girl was safe.
Over the course of the last year OIT has been come just a part of our everyday routine. Ruthie eats 8 peanuts every morning and then has a 2 hour "rest period" where she can't do things like PE or recess that would elevate her heart rate. She does most of her rest period at school and it's been easy breezy. Her teacher is wonderful and Ruthie is her own biggest advocate. I cried the first time she came home from school and told me they had cookies and her face lit up when she told me she was able to have one. That was something she wouldn't have been able to do before OIT (almost all baked goods are cross contaminated with peanut). We are also allowed to skip a dose or two every week if we need to. The flexibility that we have with dosing really allows us to control the allergy...it doesn't control us. It means that if field day (which wasn't an issue this year...sigh) is in the morning we just skip her dose that day and she can get out and run around with everyone else. We didn't want to trade one thing that socially isolates (food allergies) for a treatment that also isolates. Ruthie is also allowed to freely eat peanuts however if she does eat them she has to have a 2 hour rest period afterwards so she doesn't eat them often but every now and then she will. She got to try her first boiled peanut this year and deemed them delicious and ate a whole bunch of them! I am so proud of how she remembers to ask if her rest period is over before she goes and runs around. I think she vaguely remembers all the restrictions she used to have but she has mostly forgotten and for that I am grateful. The first few weeks of school I would get a report on all the food in the classroom/lunch table every day but by Christmas break I no longer heard anything about food. When she was debating about getting school lunch for the first time her worry wasn't about what if there were peanuts in the food but it was what if she couldn't get her milk carton open. We lived many years in fear and did a lot of educating her about asking one of us before she ate anything and teaching her VERY early to say "I am allergic to peanuts" so to know that now food can be enjoyable and not a source of fear is wonderful.
We are so thankful for everyone that supported us along our journey and we are especially thankful for Dr. Williams, our OIT allergist. He was there every single step of the way during our OIT journey, even when we had an issue on Christmas morning. He is still only a phone call away whenever we need him (that is ONE phone call my friends...not calling and waiting for a call back...one phone call directly to him...it's unheard of and amazing and gave me an incredible amount of reassurance when we were starting out). 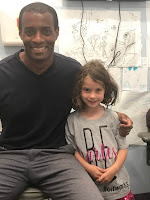 OIT isn't for everyone but for our family it was an answer to prayers. It was a little different than what we had been praying for but it was the perfect answer! My hope now is that our story can give hope to others who are living with the fear that comes with food allergies.
Posted by Stacy at 11:13 PM