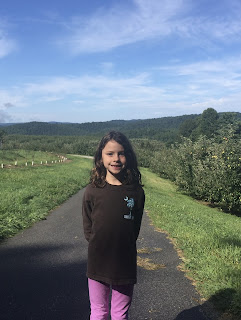 This girl. She is strong and brave and fierce and smart and independent. She can handle any situation. From the time she was tiny she could do just about anything for herself.

Here is the most recent story of Ruthie.

Two weeks ago on a Wednesday night we had shrimp pasta for dinner. We have this dish fairly often. Ruthie used to like shrimp but for a few years has said she doesn’t like it anymore and picks it out of her pasta. So Wednesday night she picked it out. Thursday was leftover night. Ruthie chose shrimp pasta and picked her shrimp our like normal. She hung around the table for awhile after she finished eating then went upstairs. She came back down a few minutes later because her eye was itchy. Her right eye always gets itchy and swells when she has a reaction to something environmental (like dust or cats). That evening Paul had changed the batteries in the smoke detectors upstairs so we both immediately said oh it’s just from the dust that was probably stirred up. No big deal.

Oh but then little Miss Independent says oh no it’s from the shrimp. Ummm...no it’s not. Why would you even think that? Then she informed us that she stopped eating shrimp (a few years ago mind you) because it made her itchy!!! Little friend. Would have been nice if you’d informed someone of that fact! Instead our little bit who can handle pretty much anything just stopped eating shrimp. (We won’t mention the fact that she was still eating the food that was cooked with the shrimp.)

I was not convinced at all that it was the shrimp. So we saved a piece of shrimp and the next day I rubbed it on her arm. She got a tiny ant bite sized hive on her wrist. So I figured we should get it checked out just to be safe. I talked to Dr. Williams (our fabulous OIT allergist) on Monday morning and he sent me an order to get blood work done for shellfish allergy. We had the blood work done Monday afternoon and Wednesday morning the pediatrician called me to let me know the blood work was back and she is allergic to ALL shellfish but especially lobster and shrimp.

To say we were disappointed is an understatement. We had gone through so much to ensure that we didn’t have to worry about food and now we have a new allergy. The good thing is that shellfish is much easier to manage than peanut. If I had to have one of those allergies I would absolutely pick shellfish. Nobody puts shellfish in granola bars or grinds it up to make crackers! We are coping. It was a bit of a shock. But it’s ok. We’ve dealt with a harder allergy. It also helps a LOT that she is older. She knows what shellfish are, she can tell people she is allergic to them, she is old enough to ask before eating something.

And she’s Ruthie so you know she’s on the ball and can handle it. I also have full confidence, based on past experience, that she will speak up and tell people that she is allergic to shellfish.

So where do we go from here? We will do blood work again in a year and do a skin test. Lots of people have asked me if we would do OIT and the answer is no. Having to eat multiple shrimp every day is a lot different than eating peanut every day! Plus when you traveled you would have to make sure you had access to shrimp. OIT is supposed to make life easier not more complicated. We may look into SLIT (similar to OIT but it is drops under the tongue and doesn’t provide the same level of protection as OIT) at some point in the future or, who knows, there may be another option available down the road. The wonderful thing is that there is so much more awareness of food allergies right now and much research being done so there is hope for the future!

So that’s where we are. And I still can’t get over the fact that she stopped eating shrimp because she was itchy and she never told anyone. We had a discussion about that. 🤣